The profusion of wireless devices – from PCs and phones, to all kinds of internet-of-stuff, has exploded in recent years.

IoT reached peak buzzword in 2014/5 and analysts predicted 200+ billion t’Ings would be internet-connected by 2020. Unsurprisingly, they were wrong by a factor of 5 or maybe 10.

Still, few people probably imagined they’d have dozens of electronic devices in their own home which connect themselves to the internet. Do you know how many things you have? Careful people might have a separate network isolated from the rest of their house just to host all their connected stuff, reducing the risk of attack from the unknown services that sit behind their internet-connected radiators, washing machines or home automation rigs. 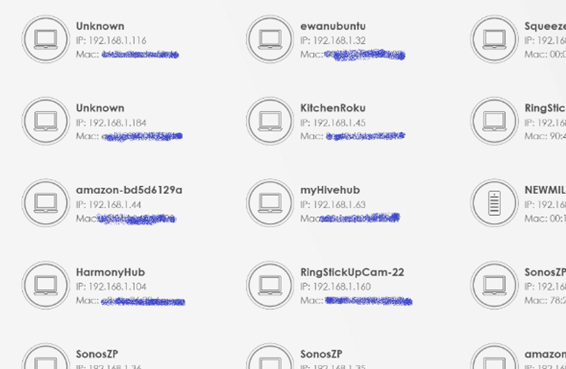 You probably have a lot of Wi-Fi enabled kit, using TCP/IP to connect through your home router. Do you really know how many there are? If you log onto your own router’s admin page, you can probably see everything that has been given a network address – maybe you’ll see the IP address assigned, and the unique MAC address which the device has presented to identify itself.

Figuring out what is what can be one of the minor annoyances that leads people to such crazy actions as not renaming their home router SSID or changing its default password. 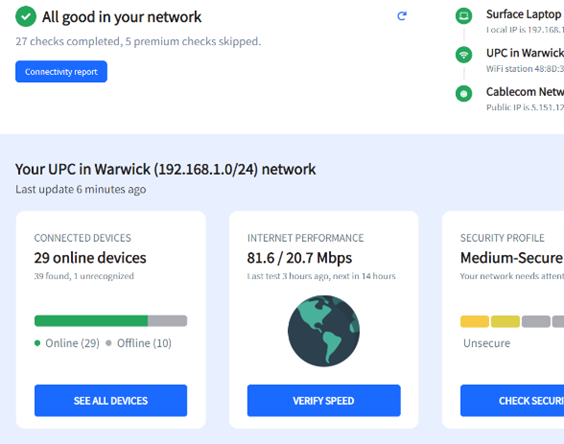 If you’re not all that interested in managing addresses on your home network, you may still want to peer into what is on it and why. Never mind joining your laptop to a guest network – what else is there, too?

A neat app called Fing has been listed in the Windows Store, which gives an analysis of your network, using a source database to tell you what other machines are there. The unique physical address that each device presents usually contains a reference to its manufacturer, and Fing has some logic to figure out which is what, so you’ll get a description for most or all of the devices, with unknown ones flagged as worthy of investigation.

You do need to sign up to use the app, but once you’ve done so, it will show an intersting view of your network. Some premium paid-for features in proactive security monitoring and in-depth reportingmay tempt you to spend a few montly £ to see what they could do for you. 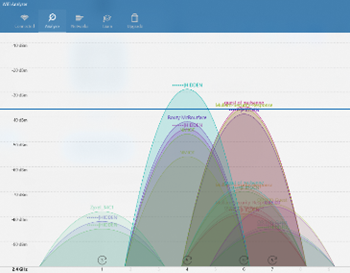 There are lots of other freemium tools in the Store which can help understand or even troubleshoot the network(s) you have at home – WiFi Analyzer, for example, will show you lists and graphs of all the wireless networks it can see in your vicinity.