I’ve no idea how accurate this information is, but in a short video on http://www.scottmcleod.org/didyouknow.wmv there are some wild predictions about the future… under the title of “Did you know?” 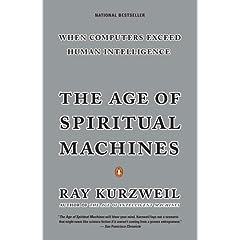 This echoes somewhat  “The Age of Spiritual Machines” by the eminent Ray Kurzweil (I saw him present once, and it was truly amazing – this guy has a brain the size of, I suppose, a planet … e.g. he invented OCR when a blind friend complained that the supply of audio books was seriously limited), where the author theorises that technological evolution is almost exponential – ie. the pace of change is accelerating.

Kurzweil reckons the first 30 years of the 21st century will see the same degree of technology progression that the entire 20th century saw, and that the next 10 years will see the same again… to the point where, by the middle of the century, nano-bots will be injected into the bloodstream to repair damaged organs and defeat blood-borne diseases.

Of course, all of this could be a load of old tosh – after all, people thought in the 1950s that we’d all be piloting flying cars, wearing space suits, and eating food in pill-form by the end of the 20th century…